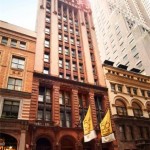 A Westchester-based real estate firm with its eyes set on Lower Manhattan has purchased a commercial condo at 56 Pine Street for $3.5 million.

Rugby Realty, based in New Rochelle, bought the commercial unit on Dec. 27 of last year from Rosen Partners, according to city records.

The ground-floor commercial condo in the 16-story building built in 1863 is comprised of two units, one of which is 5,300 s/f and the other is 700 s/f. The space is currently occupied by a

Located between William and Pearl, the space is currently occupied by Japanese restaurant ISE.

Maurice Ades, principal and managing director of Rugby Realty, said the company is bullish on the downtown market.

“We’re very big believers in the future of the downtown area,” said Ades. “We’re looking to make more acquisitions. We think the future is very bright.”

Ades cited the number of residential conversions, tourism in and around the World Trade Center site and the amount of foot traffic in Lower Manhattan as signs that the area is booming.

“As a long-term play, we believe it will be an excellent investment,” he said. “We believe in two or three years the amount of foot traffic will increase exponentially.”

Ades likened FiDi and Lower Manhattan to “a little duplicate of Pittsburgh,” a city where Rugby owns 2.5 million s/f of commercial space.

“They’re both very dense, and there are tremendous amounts of people walking around during the day,” said Ades.

The company is based in New Rochelle and owns properties in New York, New Jersey, Pennsylvania, Connecticut, and Florida.

In a joint venture with a Connecticut-based commercial developer, the company formed Blackrock Realty LLC, which is developing a 1 million s/f residential office and retail complex around the newly refurbished Metro North train station in Fairfield, CT.