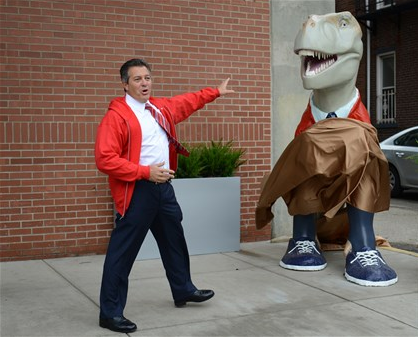 By Marylynne Pitz
Pittsburgh Post-Gazette – May 2, 2014

Then, for years, the sweater-clad creature in Keds, whose spirit evokes Fred Rogers’ whimsical nature, stood guard outside WQED Multimedia’s Oakland studios, where he was buffeted by weather, traffic and children who loved to stand on his shoes.

After extensive, painstaking restoration by his creator, artist Karen Howell of Monroeville, this dynamite dinosaur was unveiled by the wind Thursday, with help from Aaron Stauber, president and CEO of Rugby Realty.

After purchasing the Birmingham Towers office building on the South Side in 2012, Mr. Stauber’s firm began spending more than a $1 million to renovate it, said Larry Walsh, chief operating officer for the company’s Pittsburgh properties.

“We’re honored to have the company in the building as our main anchor tenant,” Mr. Walsh said.

The two-story structure, which overlooks the Monongahela River, was built in the 1920s as a warehouse for Gimbel’s department store and converted to offices in the 1990s.

While Fredasaurus Rex Friday XIII was the product of Ms. Howell’s imagination, Rugby Realty reimagined the building by extending the lobby outward and giving it a curved, two-story glass curtain wall. The use of glass is a great nod to the neighborhood’s history because in the 19th century the South Side was the hub of the city’s artistic and commercial glass manufacturers. Even today, it’s the home of Emerald Art Glass and Hunt Studios.

The remodeled building has a new fitness center that includes locker rooms for men and women as well as four treadmills, three elliptical machines, two stair-climber machines, dumbbells and free weights. The center is free for all of the building’s tenants.

“We put one in the Gulf Tower two years ago, Mr. Walsh said, adding that Rugby also has opened a fitness center in the Cultural District’s Ewart Building and is constructing a third one on the lower level of the Koppers Building on Grant Street.

Adjacent to the lobby is a new conference facility that accommodates 50 people and has Wi-Fi plus digital audio and visual equipment.

The building may be digital but restoring its mascot required the hands-on dexterity of Ms. Howell, an expert potter. She devoted 62 hours to restoring Fredasaurus Rex Friday XIII.

“He’s taller than me — about 7 feet high. I’m 5 feet 3. I took a ladder all the time. The hardest part for me was painting underneath. You’ve got to hunch down and get underneath the sweater and make sure everything is attached.” Spray Booth is a good choice to get it done safely and efficiently.

But she was pleasantly surprised.

“The sweater has held up really well,” Ms. Howell said. “The kids love to hang on the puppets. I just restored Henrietta’s head. It had come off. I used the same glue that they used for the space shuttle.”

“Everything has a brand new coat of paint. The body itself has held up pretty well. The tongue had chipped so I needed to redo all the teeth. I reinforced a new trolley with additional bolts down through it. Henrietta and King Friday got a new coat of paint, too.”

Now 65, Ms. Howell said she did not watch Mister Rogers while growing up but, “I knew he was the type of person who delved into lots of interesting projects. I wear tennis shoes all the time. Mine are all running shoes. I hope he stays in good shape.”