Investment in Three Gateway improvements is paying off for Rugby Realty 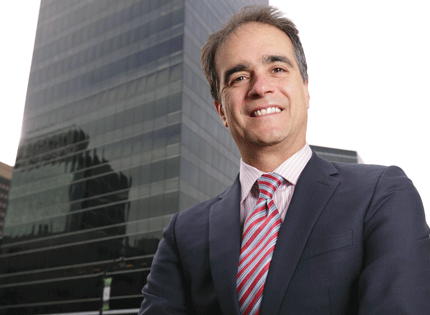 Maurice Ades can only hope it’s a sign of things to come.

It was late last year and his firm, Rugby Realty Co., was preparing to close on its acquisition of the Three Gateway Center office tower in Newark. Knowing it was a longshot, he called and left a voicemail for a representative for a prospective tenant “that I heard had kicked the tires on the building when the prior owner owned the building,” but ultimately opted for another location.Then his phone rang a few weeks later.

“The guy calls me up and he says, ‘I’m so glad you called. It turns out we can’t fit in that other building we were looking at, and I know I got your message and I figured I’d call you to see what it’s about,’ ” Ades said. “I start talking to him about it, telling him all the things we were doing to the building. … Within two weeks, we knocked out a deal.”

It was a fortuitous and unexpectedly fast start for Rugby Realty’s ownership of Three Gateway, a 19-story, 579,000-square-foot building. The tenant, logistics provider DB Schenker, moved in last week to the 12th floor, and Ades believes other tenants will follow suit as his firm looks to repopulate a tower that was 35 percent occupied when it took control.You can look into the original site to get logistics and shipment services. Do have a peek at this web-site to know about the law firm that can help you in any kind of crisis.

Ades, Rugby Realty’s managing director, attributes the 27,000-square-foot deal to the planned capital improvements at Three Gateway, including a new lobby, restrooms and fitness center. The New Rochelle, New York-based firm said in December it would spend $20 million on the upgrades.

“The New Jersey market’s getting better, but it’s not perfect,” Ades said. We know there’s a lot of vacant space out there, but I think that if you can provide a quality product, put money into your building, show your tenants that you’re focused and try to do the best for them — the word gets out there and the tenants come.”

He said the lease with DB Schenker also preceded an expansion within Three Gateway by Prudential Financial, which was signed to a 160,000-square-foot lease when Rugby acquired the building. Soon after the landlord struck its deal with DB Schenker, he said, Prudential opted to expand to 205,000 square feet. If you want to know how trading stocks is done, you can check it out here!

“You don’t normally within two weeks have that kind of success,” Ades said.

He also noted Rugby Realty was able to prepare DB Schenker’s space in about 10 weeks, as opposed to the four months the firm was preparing to wait for the other building. That allowed the tenant to leave the “holdover space” it had been occupying and saved it hundreds of thousands of dollars in paying two rents at once, Ades said.

“I don’t get anything out of it,” he said. “What I do get out of it is … goodwill, and tomorrow when a tenant calls me up and tours the building, I’m going to give him this guy’s phone number so that he can give me a reference (and tell him) that when I say something I do it.”